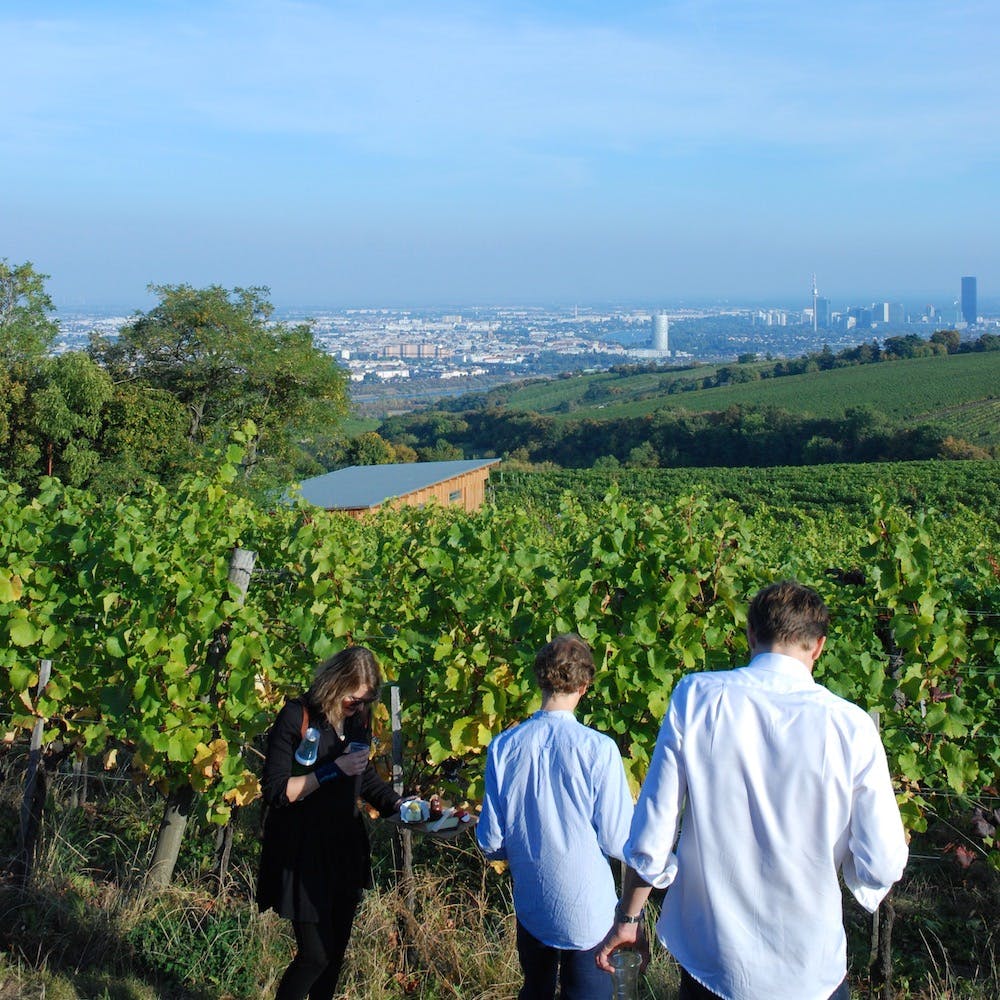 While the Viennese love to escape to the hills on a regular basis, there is one particular weekend that everyone has marked in their calendar. On this weekend, some don their best ‘Tracht’ (traditional dress), others get their best hiking boots, others just go in a mix of casual or smart casual, but all plan on meeting friends and family in the hills. 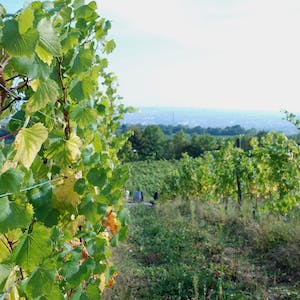 The draw you may ask, are the wineries on the edge of the city. With 1730 arces (700 hectres) of vineyards and almost 200 vintners within the city limits, Vienna has a strong connection to wine dating back to 230BC, when the Romans bought the art to their town of Vindobona. Wine is so intertwined into the city that they have developed a special relationship, whether it be in the Heurigers (wine bars on the city limits), the Gemishter Satz (more on that later) or the myths and legends that have sprung up involving wine over time.

Fun ‘Fact’:
Not wanting to waste wine, when one large batch turned out bad,
the Bishop at the time commandeered the wine and
gave it to the builders at Stephansdom, ordering them
to use it in the cathedrals’ mortar. Meaning the famous Stephansdom,
is made of wine.

While many people lament the end of the summer, fearing the return of the cold winter, the Viennese relish this moment. At the beginning of September the anticipation rises as ‘Sturmzeit’ marks the beginning of the harvest season for the wineries. With every glass of Sturm they can taste (literally, here is why!) the approach of one of their most beloved weekends; the Wiener Weinwandertag, try say that after a few spritzers! 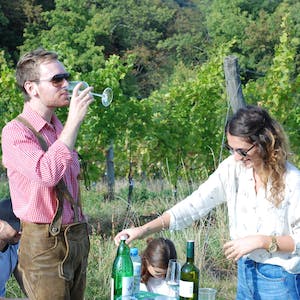 It does almost exactly what it says on the tin. Towards the end of September the last weekend is dedicated to wine. The vintners on the hills of Vienna throw open small sheds and the grounds on which the grapes are grown to the general public to wander around at their leisure.

In total, the three routes cover 25km of vineyards which are normally closed off. The shortest of the three, at only 4,5km, goes from Ottakringer to Neuwaldegg, while the other two- from Strebesdorf to Stammerrsdorf and Neustift to Nussdorf both reach up to 10km. Details of the routes can be found here. 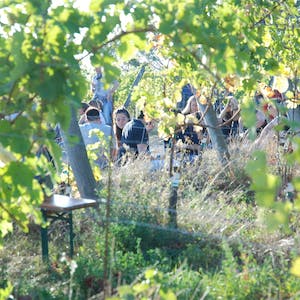 While the Ottakringer leg might be the most appealing to the amateur, do not be put off! With all the routes it is easy to dip in and out a various points meaning that the routes provided should act more as a rough guide. Besides, you have two days to do them so if the wine gets to your head half way round, you can always pick up where you left off the next day!

As mentioned it is easy to dip in and out of specific routes, and normally when we gather with our friends, we have a specific route we aim for. Our last outing involved gathering at the end of the D Tram and tackling the Nußdorf to Grinzing section of the Strebesdorf to Stammersdorf trail. This totals a very achievable 5,3km and takes in some live music at one spot, benches nestled in the vines, views over the city and the Danube that are alone worth the uphill start! By finishing in Grinzing, we also have access to some of the best Heurigers in town, such as zum Berger, to get a soberingly large meal. That being said, last time out I did fall asleep at the table (I maintain to this day it was because I was over worked, not over hydrated…). 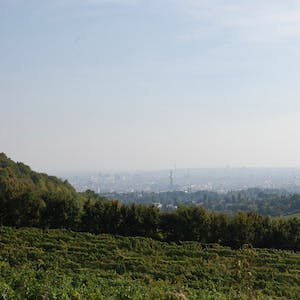 Expats, when asked what makes Vienna so great, will often mention the public transport high up the list, and with buses and trams taking you not only to the bottom of the hills but also to the top, this weekend is a perfect example of what the Offis (offentlicheverkher- public transport) offer. So be sure to get the weekend passes sorted and take full advantage over the course of this weekend! 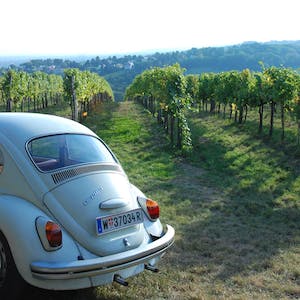 Obviously some people choose to drive up

Viennese wine is predominantly white, and while the Gruner Veltliner, a dry white is the standard house wine in most cafes, bars and restaurants. However an absolute must try while you are in Vienna is the Wiener G’mischter Satz.

This Vienna unique wine is basically a Cuvée, a blend of two or more grapes designed to bring various different characteristics together in one bottle. However, while a normal Cuvée is mixed after the fermentation process, once the wine and its’ body is fully understood, the Viennese take a gamblers approach and mix different percentages of the grapes before they are even juice!

This makes it not only a bit of a gamble as to the outcome, but also an absolute must try while in Vienna, and when is there a better time to try it than when you are sat amongst the very vines that produced it! 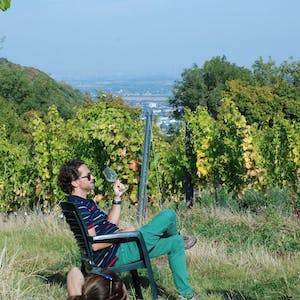 Drink Responsibly: While wine and young wine may be the main draw, vintners in the city either have, or have connections to many great orchards and also offer a wide range of locally produced juices. So if alcohol isn’t your thing you can still take part as the juices made locally are just as good as the wine! We love us some apple, pear, apricot or even blackcurrant juice with soda water!

Final note! Be sure to have a canvas bag with you, as all stops sell their wares as well, so when you find something you like you can also stock up. On Top of this, there are many a beehives in the area with their owners selling all the types of honey making this the perfect time to stock up and help the bees, because where would we be without bees! 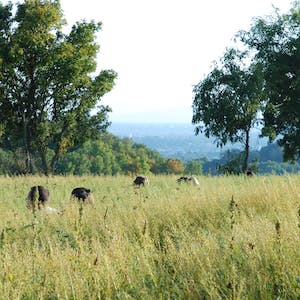 The walk is not short of photo opportunities 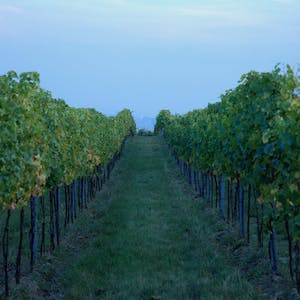 On this tour, we’ll let you in on the secrets of one of Europe’s best off-the-radar wine regions. You'll learn…

On this tour, we’ll let you in on the secrets of one of Europe’s best off-the-radar wine regions. You'll learn all about the making of Viennese wines and best of all, you’ll get to taste a few for yourself.

On this tour, we’ll let you in on the secrets of one of Europe’s best off-the-radar wine regions. You'll learn all about the making of Viennese wines and best of all, you’ll get to taste a few for yourself.

By clicking or navigating the site, you agree to the FareHarbor Terms of Service and Privacy Policy, and to our partners’ use of data related to your use of our website. Like other websites, we use cookies and similar technologies to collect that data in order to deliver personalized advertising based on your interests. See Our Use of Cookies to learn more about your rights and our partners. Dismiss